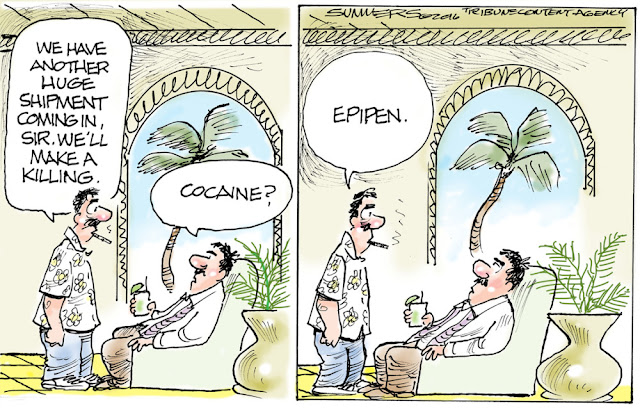 There has been an uproar over the exposure of Mylan Pharmaceutical raising the cost of EpiPens over 500% since the company acquired rights for the drug in 2007. These anti-anaphalaxis injection devices spiked to a cost of $600 for a two pack, prompting an exasperated mother to exclaim that her family no longer had a college fund but were saving to pay for Epipens.

After a tremendous hue and cry from the public and calls from many in Congress to investigate EpiPen price gouging, Mylan tried to remedy the medical marketing mess.  First the big Dutch pharmaceutical  announced that low income (families of four making under $97,000) would have no out of pocket costs. When this did not quell the controversy, Mylan later announced that it would produce it's own generic which would cost half as much.

From a public policy perspective, it is worth considering if EpiPen is an example of how crony capitalism injects price gouging.

One of the consequences of Obamacare is that many heath insurance consumers are being forced into high deductible health plans, meant that consumers could not qualify for volume formulary discounts.

More and more it seems that there is a nexus between requiring Americans under Obamacare into having high deductible insurance and pharmaceutical profits.

The only remedies seem to be public outrage aimed at the District of Calamity to alleviate outrages or wait for a total collapse of the Obamacare insurance system.